Power Word: Click Ninja is a simple point and click Ninja game that will have you bouncing from wall to wall collecting letters to spell out something meaningful. It's meant to be a difficult platform game while still being easy playable by as many people as possible.

The song is created by redrose on SoundCloud

I really liked this game! Very nice controls, very simple and elegant. Really nice audio and sound effects. The core movement of bouncing around the ninja character feels really nice, good game feel, it's fun to simply move the ninja around a blank space which is great. With some tweaking, I could see this being produced into a solid little mobile game.

The controls and graphics could use some work; the player ninja character completely blends into the background (needs more color contrast), and the text is not very readable. The hitboxes also don't quite seem to perfectly match the sprites, being too big---or they match perfectly to the sprite size, but it feels bad! In which case you should tweak the hitboxes (especially on the spinning death blades) to be smaller than the sprite appears, in the player's favor, so that the player doesn't feel cheated in-motion. We humans are not a great judge of perfect size and distance, and when a player character is quickly zipping across a game screen (especially in a game like this), if we just barely bump into the edge of an enemy hitbox while in-motion, it will look/feel to the player like they died when they weren't even touching the enemy. Always lie, cheat, and fudge the numbers a little in the player's favor. With games our goal is (generally) to create fun and make the players feel cool/smart/powerful/skillful, whether or not that's actually the case. The ninja PC also seems to hover over walls some of the time, not quite snapping to the walls as they should consistently.

Also: always make sure to cite your music sources. Neither of you claim to be the music / SFX creator in the game page above, and no credit is given to where the music or sound effects came from. We all forget to do this sometimes, but it's important to do. And if the music / SFX came from an outside source, specify the license (which should always pretty much be Creative Commons or Public Domain).

Also also: when you work with someone else, label them as a contributor to the project within itch. This is not super obvious to do without being explicitly told, but it's a cool feature that let's everyone who worked on a project be listed as a developer/creator of it, which is good practice, but also just better for everyone as the game will show up in more places. Assuming Johnny Wu has his own itch.io account (as he should): go to the edit the project page (click the green Published button). Then on the right-side of the top bar, hit More. Then Admins from the drop-down. Enter Wu's itch username to the Project Admins field. Then click Contributor. You'll then get a link you need to manually send to Wu, which they'll click, enabling them as a Contributor for the game. They'll then be listed as a second author for the project in More Information, and the game will show up on their itch.io creator page as well. And then traffic from either creator page will feed into the games you've both worked on. I know that's a big, annoying block of text, but once you do this once you'll have it down and be able to do it for all your team projects no sweat.

I look forward to finishing up your game library, and hope to see more games from you in the future! Keep up the great work!

What a cool game! I had a lot of fun playing this. It was almost immediately obvious what I had to do, and once that was done, I was having a blast doing all the intricate jumps from side to side.  Also the ambience, sound design was fun.

My only criticism, really, is that it was a bit too easy. I didn't die once. And a couple of times I feel the dangerous objects were a bit too close to me, and I should have suffered damage.

Maybe if the ninja was a bit slower, and the colliders a bit wider (just a little in both cases), this would be more of a challenge. Congrats!

Thanks for playing I had such a fun time making it. I've never made a game like this before so it's definitely very easy . These projects are a good way for my friend and I to work together , looking forward to making more!! Thanks again

Thanks for playing filod ! I also made a game for Global game jam if you want to check it out :) 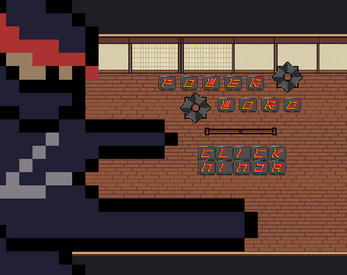